The current Project Development Cycle of the Moodle Users Association has officially hit the ground running. 13 proposals made it by the submission deadline, which was extended one day due to a small deadline miscommunication.

From now through September 15th, MUA members can allocate their votes, one for each AUD paid depending on their membership. This will make a proposal short list where projects will be reviewed by the MUA Committee, and then Moodle HQ will estimate each proposal’s cost and feasibility. The selection process will end on Sunday, December 31st, and development will start during the first quarter of 2018.

Below are the proposals that made the deadline (in no particular order): 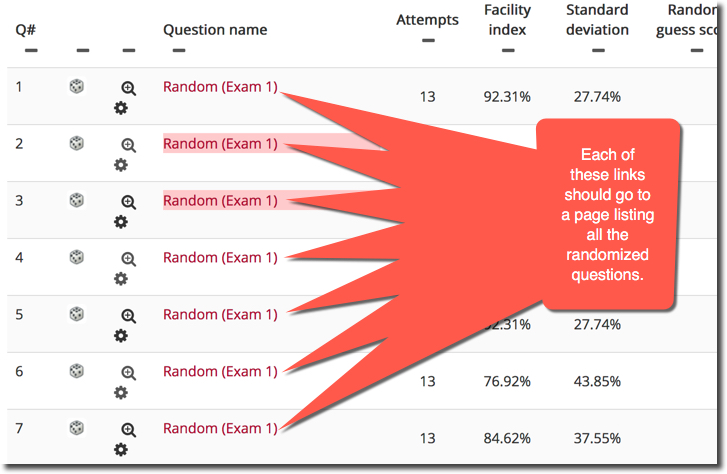 This project will make it easier for instructors to access statistical overviews of performance over randomly-generated quizzes on the basis of individual questions, in the hopes of improving the quality and standardization. Over time it would help making random question sets more balanced.

When students check out their partial grades before the course is over, the number can be misleading depending on whether it averages grades that have not yet been earned. This project will make it easier to manage grades, including across multiple categories.

This project seeks to add rubrics to the Workshop in pretty much the same way they are currently enabled for Activities. Read more about Rubrics in Moodle here.

Currently, penalties must be applied manually when a user attempts an assignment past the deadline or the exceeds a given number of attempts. This project would not only create automatic penalty rules but allow better control of granting extensions for courses or specific groups, which would automatically be reflected in the gradebook.

This project would allow personalized weightings for graded activities. There are several scenarios where students require a weighting scheme or method independent from the rest of the class. The update would also create the possibility for students to set up their own weightings.

This proposal would bring the functionality from the Merge user accounts plugin into the core, which unites records from different users of the same student, maybe even from different Moodle sites. For large numbers of users, it will schedule the job to perform the long task automatically.

As its own introduction states, “This is not a typical MUA project!” Instead, it will seek ways to make the Moodle code more “developer friendly.” The project refers to the series of notes by developers about the difficulty of deploying functionality that’s available in Moodle’s code base into a custom application. Examples are drag-and-drop, sorting, or even Bootstrap elements. With the project, Moodle will seek to adopt more general coding standards, which are expected to enhance “security, reliability and performance.”

This proposal seeks to fix the confusing interface of the Course Restore feature, making it more intuitive with clearer and more uniform buttons and by setting a development roadmap based on expert guidelines.

Improvements to Activities, Dashboard, and Due Dates

This project wants to build on the recent improvements in usability, taking good ideas such as “call to action” buttons and up-to-date ETAs across activities and course pages. It also includes several ideas to make the teacher’s dashboard easier to use for tasks like grading or reviewing entries and posts.

This project will let users visualize their Moodle past and future and allow them to edit activity attributes such as dates and priority within the visualization itself. It would make Moodle look “akin to video editing software.”

This proposal includes a series of ideas to enhance the navigation and sense of location of a student across pages, activities, and sections of a course. Persistent items, such as progress pie charts, could remind the student that a section is incomplete. It would also expand on some of the navigation features already announced for Moodle 3.4, such as the “Previous” and “Next” buttons.

This Moodle Governance related post is made possible by: eCreators. Moodle for the enterprise, K12 and corporate. Australia and Singapore. To learn more about eCreators, click here.

ABOUT US
LMSPulse.com is an independently owned and operated resource for all things about learning management systems. Since 2009, we've been on the cutting edge of development, resources and community events.